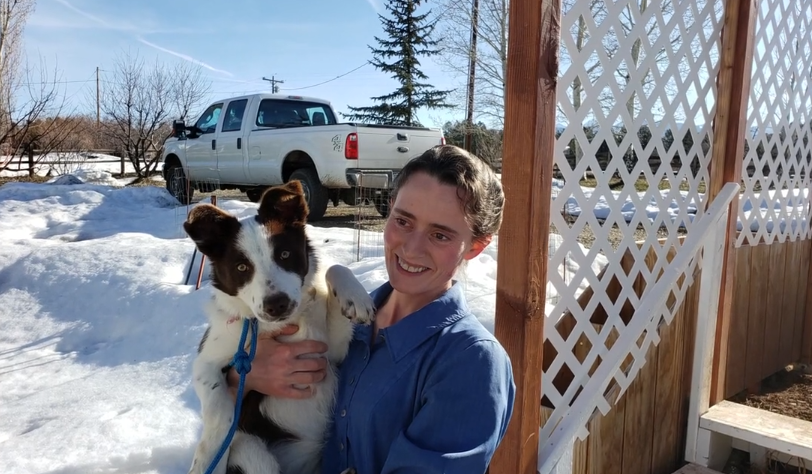 The Story of Sasha: Making a Stock Dog

The Nature of Natural’s Stockmanship project main objective is to promote the use of the principles set forth by Bud Williams and commonly known as Low Stress Stockmanship. The Nature of Natural promotes the ethical application of Applied Behavioral Science and we feel that Bud’s principles are very much in line with that objective. Having said that, many stockmen use dogs in their everyday work and so the training and use of a dog was incorporated into the Stockmanship Project.

To do that, we have asked Steve Allen, a well-known stock dog trainer to participate and help train a dog from the beginning to a point where the dog could actually be useful in everyday work, while practicing Bud’s principles. Steve, a long-time advocate and practitioner of Bud’s principles and an excellent stock dog trainer accepted the challenge and our search for a young dog began. Soon after we came up with this idea, a friend asked if I would be interested in taking a young Border Collie that she had received as a Christmas gift. As owners of Border Collie’s will appreciate, the dog was incredibly active, and Bonnie and her sisters were seldom at home due to their heavy workloads. To their credit they realized that the dog needed more attention than they could provide and although they loved her dearly, they decided to find here a good home. They came to me, Tim McGaffic, and asked if I would take her. I said I’d consider it if she had a talent for working stock, the basic requirement for our Stockmanship project. I called Steve and asked him if he felt he could evaluate a young dog that was five months old. He said it was possible. However, I was headed to the hospital for a major back surgery and Steve agreed to take her while I was recovering and evaluate her over a 3 to 4-week period. Then if he gave the green light, I would purchase her from Bonnie and off we would go to our training project. The agreement was if she worked and given her young age, we would come to Steve’s, once a month for several days, to progress her training and teach me the techniques Steve had developed since the last time I trained a stock dog (don’t ask how long ago that was).

This all happened with the idea that we would eventually be applying Bud’s principles as the dog developed and we became a handy little team. So, here is the story of Sasha on video.

3: Steve and Sasha in the round pen without a flag

4: Sasha and Steve in big pasture

Chapter Two: The Story of Sasha, the making of a Stock Dog

Welcome back to the story of Sasha. In this chapter, we will cover what the principles are of both Bud Williams, our guru of Stockmanship, and Steve’s basic steps that the dog must learn in order to apply Bud’s philosophy, methods, and techniques. Hang tough here, as there is a lot of education as to what is going on, the dogs will show up eventually. We will post a lot of videos of dogs learning the steps and or demonstrating them but for now, some explanations are in order to understand what we are trying to accomplish and the process we have chosen to get there. Later you can just go to the dog videos to see a particular aspect of the training. The videos should be able to take over from here so enjoy them and watch the progress of our little Sasha.

4: Intro to the flag